So how do you feel about all of these Jane Austen knockoffs? I was underwhelmed by Death Comes to Pemberley and won’t have anything to do with mashups and vampires. I  have been anticipating Joanna Trollope’s update on Sense and Sensibility with some trepidation, wondering how she would avoid the potential for cheesiness that afflicts so much of the Austen-inspired product. But then into my hands fell Longbourn, evidence that using Austen as a point of departure can produce something flinty and challenging and exhilarating. 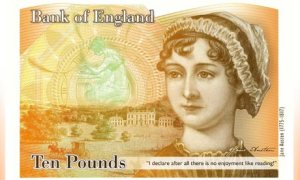 It’s come to this: Jane on the currency. Projected 10-pound banknote, courtesy of allbanknotes.com

Yes, Jo Baker has flipped Pride and Prejudice and tells the story from the point of view of the servants. And yes, we get glimpses of the Bennets, Wickham and Bingley and even Mr. Darcy — who is unlikely to evoke Colin Firth. But life among the Longbourn servants seethes with secrets and conflicts. Longbourn has none of the reassuring gloss of Downton Abbey: for Sarah and Polly, Mr. and Mrs. Hill, and manservant James Smith, opportunity is restricted and drudgery predominates.

To make the point, Jo Baker starts us out with laundry: “The young ladies might behave like they were smooth and sealed as alabaster statues underneath their clothes, but then they would drop their soiled shifts on the bedchamber floor, to be whisked away and cleansed, and would thus reveal themselves to be the frail, leaking, forked bodily creatures that they really were.” Longbourn is gritty and, eventually, raw — even gruesome. It deals with the realities of life beyond the the experience of the Hertfordshire gentry: slavery, unemployment, the Peninsular War, drink and disease and damage. James Smith, the enigmatic newly-arrived footman, thinks about the Longbourn people, “No one here seemed to have any real notion of the world. This was innocence as deep and dangerous as a quarry-pit.”

He’s wrong about that, actually. Housekeeper Mrs. Hill understands the conditional quality of the servant’s life and when Mr. Bennet’s heir Mr. Collins arrives she wants to impress him, knowing that “he could, if he chose to, dismiss them all with a snap of the fingers once Mr. Bennet was dead, and this secure little arrangement would be peeled into its separate parts and flung to the four winds.”

But James Smith — whose position as the new guy in town mirrors that of Bingley, Darcy, and even Wickham — has seen much worse, and for him the kitchen and stables of Longbourn represent safety and comfort. Even though he knows them to be precarious. Even though the maid Sarah catches his eye and his heart, as she does ours.

Sarah is thoughtful, observant, inexperienced, hard-working, plucky and independent. She has known little in life besides her duties at Longbourn and she burns with curiosity. One of the many gifts Jo Baker displays here is the ability to create fully-rounded characters. Another is the adroit plotting that sows surprises the length of the book, so that I was not sure until the very last page how everything would turn out for the characters I was by then so fond of. And what I admire perhaps most of all is the voice, which straddles the contemporary and the historical without falling into anachronism on either side. If I had to use one word to describe Longbourn I would call it “bracing.” If you gave me another word to play with, I’d add “terrific.”

I spend most of my time writing and reading. Most recent publications: the reissue of "To Marry an English Lord,"one of the inspirations for "Downton Abbey," and the historical novel "Leaving Van Gogh." I am too cranky to belong to a book group but I love the book-blogging community.
View all posts by carolwallace →
This entry was posted in anglophilia, historical fiction and tagged Jane Austen, Jo Baker, Joanna Trollope. Bookmark the permalink.