It’s not easy to buy me books, but Beloved Husband outdid himself this Christmas. And say what we will about the state of the book market, it’s pretty cool that he could find a French paperback published in 2007 and put it under our tree.

The portrait of the title is Ingres’ fabulous painting of Betty de Rothschild, completed in 1848. It is still in the Rothschild family, so Pierre Assouline  must have had extensive cooperation from the family. No surprise: he’s a very well-known French journalist and author who focuses on the broad area of intersection between culture, politics, and social history in France. (For instance, see his Le dernier des Camondo.) Le Portrait builds on some of that context, because it is narrated by the portrait itself. 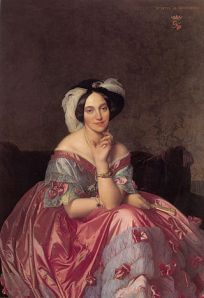 Clever, no? Betty-the-portrait is a wonderful character; cosmopolitan, warm, grand. And what a world she has seen! Born a Rothschild in Vienna in 1805, she married her uncle James in 1824 and moved to Paris. In those early days of the Rothschild banking empire, there were brothers in London, Paris, Frankfurt, Naples and Vienna. (They were known as the “five arrows” of international banking.) Betty describes the luxury of their way of life, the beautiful houses, the relationships with artists and musicians like Rossini and Chopin. This section of the book is catnip for social historians: for instance, did you know that there was a French category of friendship known as “relations de bal?” I suppose those would be casual, dancing-partner friendships? Certainly a level of acquantanceship that exists no more. Betty is fond of observations like this: “In a certain society, knowing how to express yourself in five languages is also knowing how to be silent in five languages.”

But grand as they are, the Rothschilds are also Jews, and this essential part of Betty’s identity is always in the foreground. The family and the businesses are knit tightly together; the children marry in the faith; the quality of “other” is never forgotten. Betty’s portrait is often seen primarily as a painting of “la grande Juive.” So we know where this story is going. First there is the Dreyfus dust-up, and ugliness starts to appear. Then Assouline skips to a day in 1938 when Betty  witnesses the family’s reaction to news from Germany: papers burned, accounts closed, preparations for the worst. Then the portrait is captured. Betty’s not a fan of Goering, and does not enjoy her spell in the salt mines.

The last portion of the book covers the portrait’s career at various post-war exhibitions, which gives Assouline a way to work art-historical interpretations into the narrative. By and large, Betty isn’t  impressed. She is, however, saddened when the furnishings of the  Hôtel Lambert, the Rothschild house on the Ile de la Cité in Paris and her home since 1975, are split up after the house is sold to Qatari prince: “A dispersion is always a heartbreak, even if everything remains within the narrow limits of the family circle.” But Betty is not sentimental. Her last words, true for portraits and families as well as for women, are, “We will never again be the way we were. That’s the way it is.”

I spend most of my time writing and reading. Most recent publications: the reissue of "To Marry an English Lord,"one of the inspirations for "Downton Abbey," and the historical novel "Leaving Van Gogh." I am too cranky to belong to a book group but I love the book-blogging community.
View all posts by carolwallace →
This entry was posted in art history, French. Bookmark the permalink.