Posted on September 27, 2010 by carolwallace

I would have said that a novel about missionaries in China would not be something I loved. On the face of it, the subject sounds earnest and possibly dull. But then there’s this title, The City of Tranquil Light: so evocative, haunting, beautiful but potentially melancholy. Then there’s the first line of the novel: “Suppose it is an autumn day, fine and clear and cool.” This is the voice of Will Kiehn,the elderly former missionary living in Southern California. Bo Caldwell has made his voice simple, lyrical without fuss, and trustworthy. 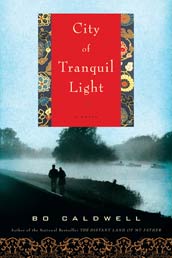 The structure is equally simple. Will is looking back on his life, and in particular on the twenty-five years he spent in a city called Kuang P’ing Ch’eng in the North China Plain. As a young Mennonite in Oklahoma he felt called to go out to China and on the voyage, met his future wife, Katherine. Caldwell cleverly weaves Will’s account with journal entries left by Katherine, giving us insight into their marriage and another point of view when the two are separated. Will is somewhat ingenuous, but also inspired and obviously charismatic, while of the two Katherine is the old soul, skeptical, practical, driven more by anxiety. She has medical training, so when the two begin serving in China, she opens a clinic.

When I say that the tone and the pace of the story remind me of the Laura Ingalls Wilder books, it’s a huge compliment. After all, part of the conflict of the novel pits Will and Katherine against their setting. How will they make a home? How will they cook, how win the trust of their new neighbors? What will they do with the gigantic Chu Chung Hao, a former martial arts teacher, whom Will invites to live with them? (Katherine: “even though they’ve known each other for only a few weeks, they seem as comfortable with each other as old dogs, so much so that it’s a little disconcerting.”) And then, history overtakes them: famine, earthquake, bandits, warring armies. Did I say “dull?” Anything but.

And these are missionaries, let’s not forget. They have come to China to share what they conceive to be the good news of God’s love. This is the unifying thread in the tale and Caldwell absolutely convinces us of Will and Katherine’s sincere faith. The book is in no way preachy. It is intensely moving. As a church-goer, I can’t imagine how this will play to non-believers. I am not sure about the present-day merit of the missionary impulse; spreading the Gospel has become intensely complicated. But Will and Katherine Kiehn believe completely in the urgency of their project, and working within that earnestness, Caldwell comfortably skirts 21st-century scruples.

As a writer, I particularly admired the pacing. It’s not easy to maintain narrative tension along the arc of a sixty-year story. Caldwell slips between scene and summary with particular finesse. And she gives Will’s voice a kind of ruminative polish: these are episodes he has thought about, reiterated, turned into tales. Hence, perhaps, the melancholy; part of any story told by an old man whose important years were spent far away and long ago.

I spend most of my time writing and reading. Most recent publications: the reissue of "To Marry an English Lord,"one of the inspirations for "Downton Abbey," and the historical novel "Leaving Van Gogh." I am too cranky to belong to a book group but I love the book-blogging community.
View all posts by carolwallace →
This entry was posted in contemporary fiction, historical fiction and tagged Bo Caldwell, Laura Ingalls Wilder. Bookmark the permalink.

2 Responses to Bo Caldwell, “The City of Tranquil Light”