Edith Wharton, “The Age of Innocence”

I went back to this to see how Wharton managed to write a novel about a doomed passion and thwarted sexual attraction without ever betraying the decorum in which the characters lived. And having read The Age of Innocence this time around with great care, I’m still not sure I know how she pulled it off. Nothing happens onstage;  the most overtly erotic gesture come when Newland Archer kisses Ellen Olenska’s wrist. No voices are ever raised. Yet when, at the end of the novel, Wharton discusses the behavior of the Old New York community in tribal terms, it doesn’t seem overheated. “It was the old New York way of taking life ‘without effusion of blood'”:… Archer felt like a prisoner in the center of an armed camp.” This, mind you, occurs at a formal dinner party.

Part of Wharton’s genius is in her narrative voice. She generally stays in Archer’s (somewhat fatuous) consciousness, but regularly steps back to analyze the limits of his outlook. And while she is kind to him, she is also pitiless, for Archer has just enough imagination to feel superior to his milieu, and just little enough to stay tethered to it. On the one hand, he scorns his beautiful but limited fiancée May Welland, yet she is canny enough to tie him to her for life. So who won in the end? Wharton is also savage about the fate of women in the social New York of her childhood, a sequence of girlhood ignorance and matronly acquiescence, both partnered by masculine hypocrisy. Women, the narrator states, are to be forgiven for lying to their husbands since “A woman’s standard of truth was tacitly held to be lower: she was the subject creature, and versed in the arts of the enslaved.” 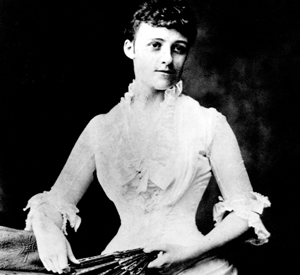 There’s a lot of this cool reference to violence in the narration. Heavens, one of the scenes even takes place at an archery contest! (The young ladies shoot: it is a beauty pageant with sharp objects.) Some of the searing quality of the tone probably comes from years of Wharton’s evaluation of the provincial New York that was so cruel to her as a very young woman. (She was not pretty; she was not allowed to marry the man she loved.) Her analysis has an unsparing, surgical precision.

One forgets how much of the book takes place outside of New York and even out of doors. In my memory the characters are always indoors, in overstuffed, overdecorated rooms. Formality, in this world, has a complex relationship to rectitude — replaces it? Represents it? Maybe both. Despite the elegance, this is a harsh book. Wharton puts her characters into an impossible position, where self-fulfilment means betrayal. And, under cover of kid gloves and potted hydrangeas and sterling silver button hooks, she keeps applying pressure. In some ways this is just Ethan Frome all dressed up.

I spend most of my time writing and reading. Most recent publications: the reissue of "To Marry an English Lord,"one of the inspirations for "Downton Abbey," and the historical novel "Leaving Van Gogh." I am too cranky to belong to a book group but I love the book-blogging community.
View all posts by carolwallace →
This entry was posted in classic and tagged Edith Wharton. Bookmark the permalink.

4 Responses to Edith Wharton, “The Age of Innocence”